On Saturday, September 24th, 2016, Edson Penado won his first Professional Mixed Martial Arts (MMA) fight at The Point Casino in Kingston, WA.  Before and after stepping into the cage, Edson displayed happiness, positivity, gratitude and humility toward everyone around him, especially his opponent, Jake Blaski.  Anyone who knows Edson understands that Saturday was one of his dreams coming true.

This dream has been years in the making, when Edson came back into Quincy Brazilian Jiu-Jitsu (BJJ) stating, “I want to go pro, and I realized from my last fight that I really need to get as much BJJ instruction and training as I can.”  Quincy BJJ Head Coach, Jeremy “Pipes” Seda, replied with, “then you do exactly as the coaches and I say, put on a gi (uniform), don’t try to hurt anyone and be here absolutely every class.” For the next two months, Edson trained, not knowing that Coach Jeremy made it his goal to submit Edson as many times as he could to “break him mentally, so he could be built back up with a solid foundation.  A method inherited from wrestling coaches, Greg Martinez and Ross Kondo.”  Asst. Coach, Christan Seda, had the duty of breaking Edson physically through intense conditioning sessions.  Christan said, “I would push Edson to the point where he wanted to quit, and then keep going, because I knew it would make his fight feel easier compared to what I was putting him through.”  At one point, Edson had even told his wife, Vanessa, “I don’t think I can do this,” but she always encouraged him to keep going.  Then one day, Edson caught Coach Jeremy in a submission (a manipulation of a joint or choke, causing the opponent to tap out), which he immediately apologized for doing.  Jeremy responded by saying, “You have no reason to be sorry! More importantly, what was different tonight?”  Edson said, “I stopped caring about getting submitted and just decided to focus on what I needed to do to be better.”  The foundation had been laid down now to start building Edson back up.

Fast-forwarding past several tournaments, three amateur MMA fights and injuries to his hands, wrists, knees, ankles and shoulders, Edson reached the point where he felt he was ready to make his Pro debut.  Months went along, searching for a Pro fighter who could be matched up with Edson.  Finally, in early August of this year, Chris Stone of Gig Harbor MMA found Edson a fight.  With an already aggressive timeframe, the pressure compounded a little more when Edson caught a really nasty cold that made him miss three weeks of training.  Edson still pressed on toward his dream.  While all the setbacks had been a frustration to Edson and his team, they paled in comparison to the last 24 hours leading up to the fight.

Following a week of cutting weight, Edson arrived at his weigh in the day before his fight only to find his opponent did not and would not make weight.  The day of the fight, Edson found he would have a different opponent.  Then, two hours prior to stepping into the cage, he found a third fighter, Jake Blaski, was set to become his opponent.

As Edson and his coaches were making their way to the cage, his music was abruptly cut off.  Refusing to marginalize Edson’s big moment, Edson was coached to hold back to wait for the music. A couple of minutes passed and the event’s announcer finally said, “Ladies and gentlemen, let’s help out with the music AND GIVE EDSON PENADO THE INTRO HE DESERVES!”  The applause, whistling and cheering was deafening as Edson made his way to the blue corner.  As each of the coaches hugged Edson, he had the biggest smile on his face and all that you could hear coming from him was “thank you…thank you…thank you.” 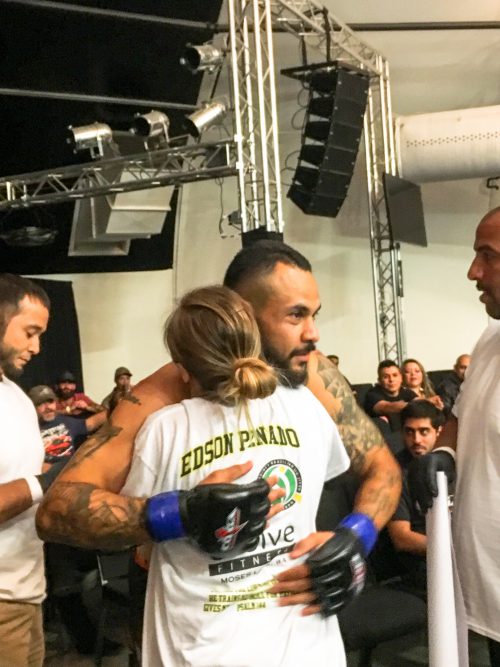 Halfway into the first round, Edson had a back mount position on his opponent, and after repeated strikes, the fight was stopped.  As Edson went back to his corner to thank his coaches again, his concern and humility took over when he realized his opponent was still down.  He rushed over to help Jake Blaski, which is not the respectful thing to do, but it was the loving thing to do.  It was in that moment that Coach Christan and Jeremy both knew that their work with Edson had been completely worthwhile.  Edson achieved his dream, but more importantly, his character had been transformed.  Edson’s beautiful display of sportsmanship at his first pro fight and for his downed opponent, made everyone realize that he is indeed a Professional Fighter.

Edson wanted to be sure to give thanks to his boxing coach, Marcelo de la Rosa, Quincy BJJ’s Coaches & Students, Chris Stone of Gig Harbor MMA, T-Town MMA, Imperial Jitz and his sponsor Evolve Fitness.